Close
Small, Urban and Organic Farmers Benefit from Farming Without The Bank Strategy

Small, Urban and Organic Farmers Benefit from Farming Without The Bank Strategy

In 2015, urban farmers produced 20% of the world’s produce and another article claimed that nearly 50% of the inner city produce served was being provided by urban farmers. Urban and organic farmers are finding that the bank’s lending institution collateral criteria make it impossible to get a bank loan for the project.

My mentor Nelson Nash always says, “banking” is an exercise in imagination, reason, and logic and he is so right. Many people will read Farming Without The Bank or pass it by because they think it’s just for large-operation traditional farmers. This is not the case, the process I write about in Farming Without the Bank is for anyone who uses money. Now I’m guessing that is you.

If you have done any of the following things – this book is for you:

You bought something as small as a pop

You purchased something as large as a tractor

It’s for ALL who use money. It’s simple, but it is not easy.

Imagination is the hardest part of this whole concept.

I have a client who is a small farmer and he is using this Farming without the Bank system for his small vegetable operation. This is not just for large traditional farm/ranch operations. ALL farmers (large or small) need money!

That part of farming does not discriminate.

This means the Farming Without The Bank strategy works for organic farmers, urban farmers, goat farmers, start-up farmers, taking-over-the-farm farmers, and everything in between.

Urban and organic farmers are out there creating an exciting shift in agriculture!

If you’re like most farmers, you know the struggle to get funding from the banks. Most of you are working full-time jobs and farming on the side. Heck, I have some small farmers who are using credit cards as operating lines of credits (the highest loan interest percentage) or cashing out 401k’s to start the farm.

Sound familiar? As an entrepreneur, it doesn’t matter the industry, you are being creative to get started because you have to be. I want to let you in on a little secret you should thank the bank for saying “No.” Because they said no, they are forcing you to be creative which allows you to avoid the rut of traditional financing. That rut can get deep and takes your livelihood.

The struggle is real, no matter the size. We all are working the same industry that is based off commodity prices. Just one more reason it is important – critical to the future of your business – to be smart about how the money is handled and how cash flow is managed regardless of your size.

So please, if you are an urban, organic, or new farmer keep an open mind and seek information on the Farming Without The Bank strategy. If you do, you’ll have the opportunity at a better start than those who inherited the broken thought process of debt. 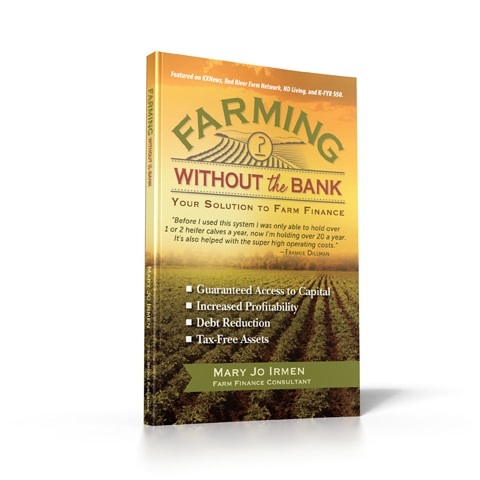 Purchase the book Farming Without the Bank now and find out how this can help you.

Happy reading and I look forward to hearing your stories.
Mary Jo