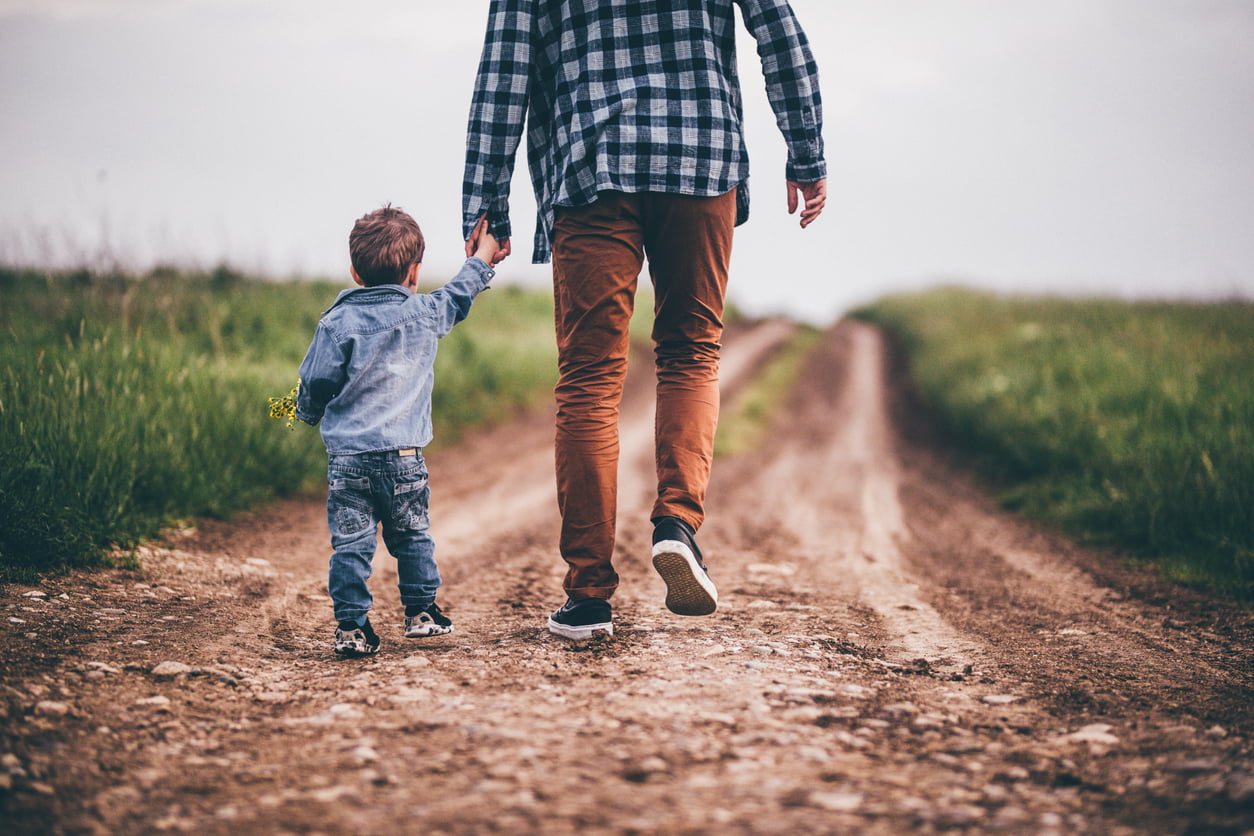 Generational Wealth That Will Save The Family Farm

The struggle is real. One day it’s glorious, and the next could be the day that wipes it all away.

THE GOOD NEWS IS AMERICA DOESN’T HAVE TO LOSE.

We CAN save the family farm with a little bit of planning. You may not see it in your generation but it HAS to start with your generation. I wrote a blog about taking care of the next generation titled, Who Are You Building It For. If you haven’t read it, take a look.  This article is the sequel because I am going to crack the numbers so you can see just how powerful the Farming Without The Bank strategy is.

The scenario I ran was with a Grandfather (Charlie), Son (Jason) and Grandson (Beau). This is three generations and yes, I used males because I wanted worst-case scenario numbers.

As always I can’t run EVERY scenario so use your imagination, reason, and logic when reading this.

SETTING UP THE FAMILY FARM TO WIN

Grandpa Charlie starts a whole life insurance policy set up like Mary Jo would on himself at age 60. He decides to budget for $20,000 of premium every year. Charlie lives until he is 80 yrs old at which time his death benefit is $671,692. Jason, his son, and farm business partner received the death benefit INCOME TAX-FREE. 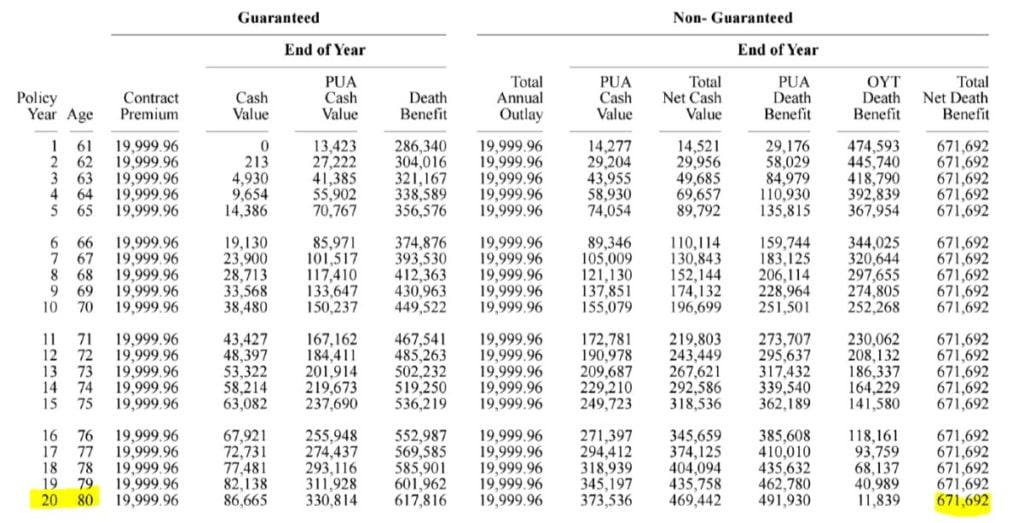 Grandpa’s death benefit is left to his son, Jason, who is 55 yrs old at the time of his father’s death. Jason takes this $671,692 and starts a policy with it. This money pays for the first eight years of premium, and from that point on Jason pays the $20,000/year premium until he passes away at age 85.

Look at what Charlie has done for Jason, not only has he left him money to operate but by the time his $671,692 money gets into the policy in year eight, it has already given Jason access to $720,661 of cash value! Jason already has around $49,000 more to use for farming then his Father left him. You can continue to look down that cash value column to see what Jason has to work with for operating expenses, retirement, helping the kids through college, weddings, and the list goes on and on. 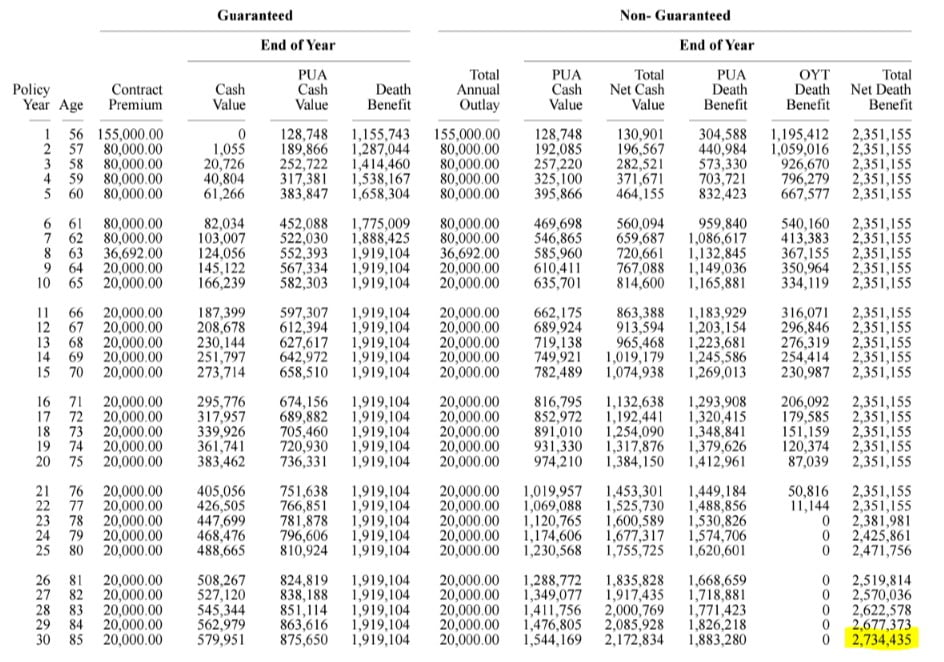 When Jason passes away his son, Beau, is 55 years old. The same age his father was when his Grandfather died. Beau father has taught him well, and he too takes his inheritance of $2.7 million and buys a whole life insurance policy on himself. Beau uses this money to fund the first eight years of a life insurance policy. From that point forward Beau pays $75,000/year to continue funding his policy.

Now that may seem like a lot but after two generations of inheritance, the policy can be easily funded for the maximum benefit. 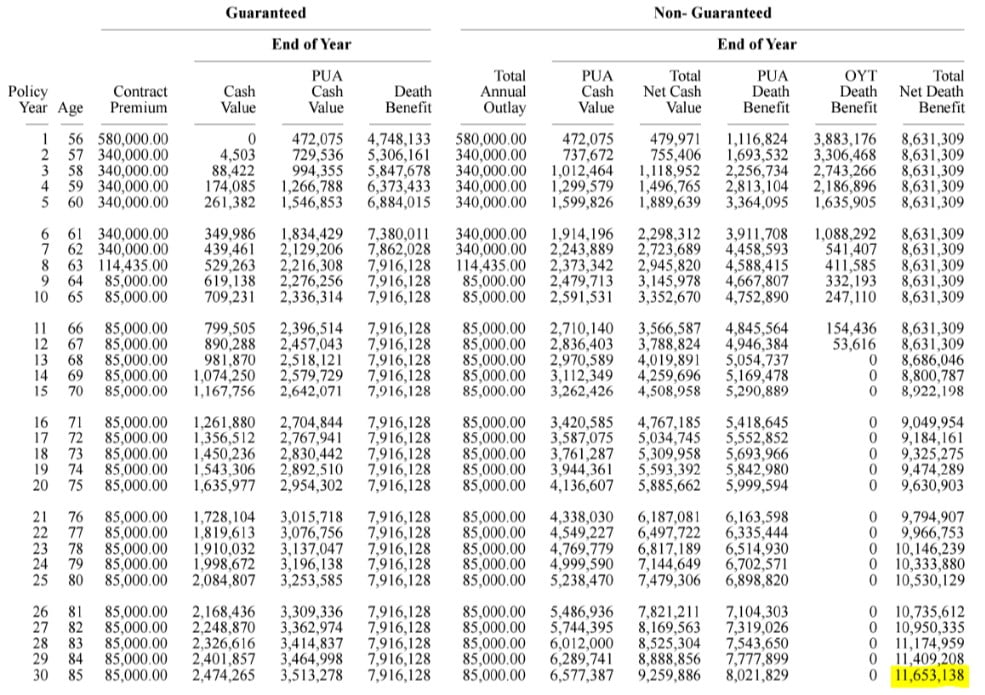 Beau, like his father, has cash value to use for operating expenses right away and by the end of year eight, he has allocated the entire death benefit to the policy which has a total cash value at that time of $2,945,820. In eight years with no additional cash input, Beau has around $211,000 MORE than what his father left him.  Beau too has the same opportunities to do what his father did with his policy cash value, buy land and increase the farm, help the kids, retire, and the list continues to go on and on.

THE FUTURE OF THE FAMILY LOOKS GOOD

NOW, take another look at what Beau is going to leave his children when he passes at age 85…….

Each of the policy death benefits left the next generation with 4-times more than what the first had. That means if Beau’s son moved this money to a policy he would leave his children around $46.6 million dollars.

Did I mention this is INCOME TAX-FREE?

MAKE YOUR MONEY WORK AS HARD AS YOU DO

This article shows how you can build wealth for “pennies” on the dollar. The total out-of-pocket premiums over the lifetime of all three of these men were $2,710,000 and the total death benefit payout was $15,059,265. That means they paid $0.18 cents for every dollar of a death benefit.  (Again we have to use logic, the money that was used to start these policies from death benefit was NOT out-of-pocket for Jason or Beau. Anything after year eight was out-of-pocket for them.) When you look at what the fourth generation’s “cost” will be it goes down to around $0.15 cents on the dollar.

The whole time Charlie, Jason, and Beau had access to the cash value to farm and live with.

Who is going to start your generational wealth plan? If it’s not you, why?

If you have not read the book Farming Without the Bank you may want to pick that little book up to get more details on how this works. It’s time to get away from the banks and time to start thinking about the next generation. You’ve worked your butt off to get here, don’t throw your hard work away. Give it the ability to keep going.

As always call when you are done reading the book so we can visit and I can get all your questions answered. Yes, I am an agent, and yes I can help you through the process of living life without the bank. 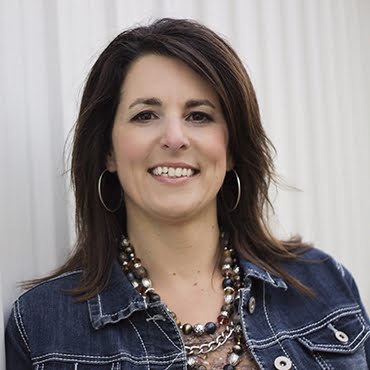 P.S. There is a reason I used 8 years as the magic number to transfer money over. If you want to know why, feel free to call me. I’d love to explain.