Two articles were published in the first weeks of January 2017 that you have to read. One is about a bill that is being introduced in Congress to force savings for retirement and the other is an interview with one of the “founders” of the 401k about the over expectations that were set and the under-performance of the 401k.

Here’s a short video of my thoughts and how each topic affects your future.

Do you have a savings system in place that allows you to use cash while saving for retirement? Learn about an option that I believe is more fitting for today’s hard-working American.

Quoted from the CNBC On The Money interview:  “We’ve been trying to fix the 401(k) system, the IRA system and we have concluded it can’t be fixed.” – Teresa Ghilarducci Watch the full interview here: http://www.cnbc.com/2017/01/13/this-professor-says-it-is-time-to-kill-your-401k.html 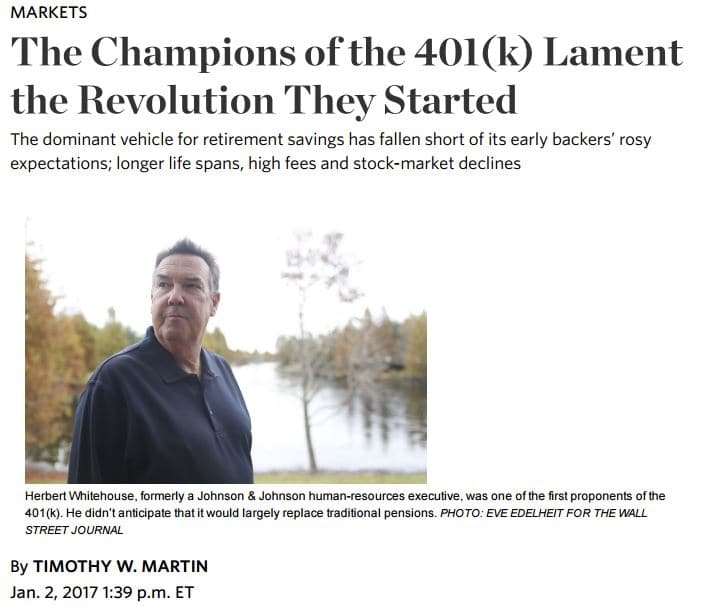 Excerpt from Wall Street Journal Article: “Many early backers of the 401(k) now say they have regrets about how their creation turned out despite its emergence as the dominant way most Americans save. Some say it wasn’t designed to be a primary retirement tool and acknowledge they used forecasts that were too optimistic to sell the plan in its early days.Others say the proliferation of 401(k) plans has exposed workers to big drops in the stock market and high fees from Wall Street money managers while making it easier for companies to shed guaranteed retiree payouts.“The great lie is that the 401(k) was capable of replacing the old system of pensions,” says former American Society of Pension Actuaries head Gerald Facciani, who helped turn back a 1986 Reagan administration push to kill the 401(k). “It was oversold.”

Social Security is already broke and they want to mandate we hand over money so they can manage YOUR retirement. Teresa Ghilarducci has pushed the GRA bill since 2007 and she’s even calling it the guaranteed retirement account bill. Her will to push this through is undying, but it would be just another failed experiment if you ask me.

Excerpt from the MoneyWatch Article:“The proposal would be funded by a mandatory contribution of 3 percent or so of full-time workers’ pay, half of which would be paid by employers. Low-income earners would receive tax credits to offset the additional cost, and self-employed workers would pay the full amount, like they do now with Social Security taxes.

The funds would be automatically deducted from pay, pooled together and invested in long-term, low-fee vehicles that could generate better returns and fewer losses than 401(k) plans. In that sense, GRAs are more akin to pensions, which many employers long ago traded in for less expensive 401(k)s.

Read An Additional Article that talks about the GRA Bill: Why the 401(k) Is A Failed Experiment

Mary Jo is proud to be a Certified Infinite Banking Practitioner helping family farms keep more of the profits, create financial systems, and bring financial clarity to an uncertain industry.

Outstanding in My Field – Qualified Agents and The Other Kind